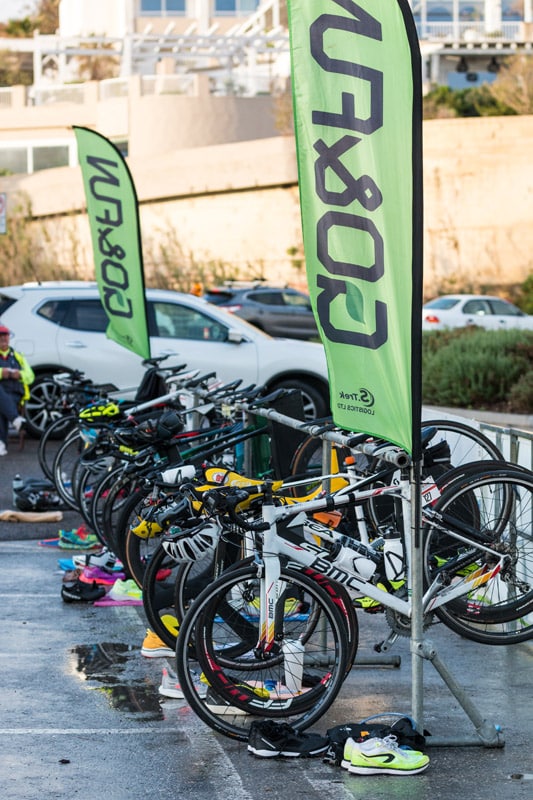 Due to the series starting off earlier than usual, conditions on the day were slightly more challenging with wetsuits being used and a slippery cycling route due to the heavy downpour  during the night.

Race favourite Keith Galea (Birkirkara St. Joseph) had  to contend with a strong Kai Azzopardi (Agones SFC) who was the first to come out of the 750km swim. Azzopardi, who is fairly new to the triathlon scene made the most of the 23 second advantage over the highly experienced Galea to take the lead on the 20km cycle route. However, experience came into play and in the second lap Galea overtook Azzopardi to take the lead. Despite Azzopardi doing his best to narrow the gap, Galea led the way in the 5km run to take the first win of the season.  In third place was TriGozo’s Ryan Muscat. Muscat was third out of the water but slipped down to fourth place in the bike segment. He climbed to third place with a steady run to complete the first podium of the Series.

Danica Bonello Spiteri (Pembroke Athleta) was another race favourite who managed to give herself a gap ahead of Keira Attard (Tri Gozo) and Elisa Martinotti (Birkirkara St. Joseph)  in the swim.  Bonello Spiteri maintained her advantage throughout to win with almost a three minute advantage ahead of second placed Krista Kuusijarvi. Kuusijarvi, who in spite of having a faster bike and run segment, was not able to narrow the gap suffered in the swim segment and had to settle for second place.  In third place was Attard, who registered the third fastest run of the day.

Trophies to the top three males and females were presented by Club Officials Joseph Farrugia and Maria Vella-Galea.

“The Club has launched its annual summer of sport with the first race of the Go&Fun BSJ Sprint Triathlon and Youth Triathlon Series for which there was a strong participation, particularly in the youth series – this augurs well for the future of the sport, locally”, explained Euchar Camilleri.

The Club would like to thank Transport Malta,  Naxxar Local Council and Naxxar District Police for their support in the organisation of this event.

The next race of the Go&Fun BSJ Sprint Triathlon Series and the BSJ Youth Triathlon Series will take place on Sunday 12th June. Registration is open online via this link – https://bsj.mt/event/2022-bsj-sprint-triathlon-series-race-2/